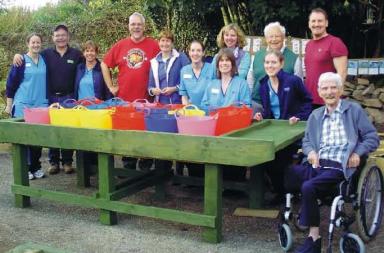 Health professionals of all disciplines are using gardening to help people get well and stay well. Are you a GP, an occupational therapist, a nurse, psychiatrist, clinical psychologist, community psychiatric nurse or physiotherapist interested in offering gardening as part of your practice? Through the Trellis Project Network, you can contact others who offer gardening as a therapeutic intervention to help people dealing with health conditions of all kinds. You may want to get in touch to learn from others or just to exchange ideas. The Trellis network of therapeutic gardening projects is varied and includes groups offering services to:

“I think that every Occupational Therapist should be going on this course.”

Browse the Map and Directory of projects to get a sense of the projects in the network or contact us if you would like help to find projects working in your area or with the same target group.

Support Services Learn new horticulture or care skills at our Training Days, pick up new ideas at one of our Good Practice events, and share news and tips with over 150 delegates at our Annual Conference (link).

Contact us for help, advice and a friendly chat about your therapeutic plans and questions – we’ll try to find all the answers you need via our Query Service.

Browse our factsheets on everything from ‘Dementia and Gardening’ to easier, ‘Adaptive Gardening’ ideas.

Explore some of the research evidence relevant to therapeutic gardening. Being aware of the pertinent studies helps you understand how gardening fits within your evidence-based practice.

Case Study: Reasons to Get Out of Bed

Fran was admitted with acute psychosis to a psychiatric unit while she was pregnant with her second child. There were several admissions to hospital in the Borders area over a period of 5 years, particularly after the birth of her son and a diagnosis of ‘Complex Trauma’. She was helicoptered off a hillside in a blizzard having gone out on a ‘one-way walk’. She’d lain down in the snow and was unconscious. “I had no intention of coming back. I’d had enough.”

In hospital, Fran didn’t want to take care of herself, to eat or get out of bed. Then one day, Jan Moffat, the nurse who runs the Space to Grow Project brought a pot, some seeds and compost to her room. She wasn’t interested at first, but then after the seeds sitting in her room for about a week, she sowed them. The next day they needed watering, so it gave Fran a reason to get up out of bed. Then the seeds sprouted and that led to more reasons to get up. Eventually, the seedlings grew too big for the pot and needed potted on, so Fran went down to the Space to Grow allotment. This meant not just getting up, but taking a shower, getting dressed, eating something first.

Through the garden, she started coming out of herself and taking an interest in looking after herself and others. “I found myself again” says Fran. “By the end of that admission I was teaching other patients about gardening. I was discharged from Mental Health Services a year ago and am now volunteering at the garden and helping find funding to sustain it and even to set up outlying projects.”

Now back at work as a staff nurse and busy caring for her 2 children, Fran says, “I don’t think I’d be here without the garden project.”